For centuries, hardwood planks have been the ultimate material for residential floors. Combining exceptional durability with unrivalled good looks, oak, walnut, cherry, or other solid-wood floorboards add value and beauty to any home they grace. But these days, handsome timber planking is not only found underfoot but also on the ceilings and walls of many stylish houses, whether newly built or freshly renovated. 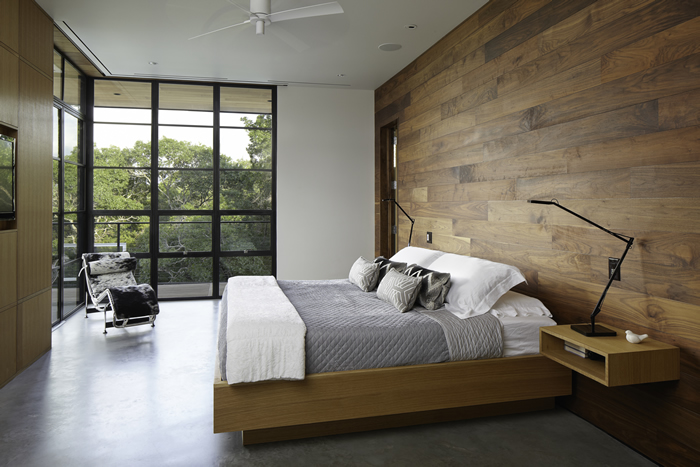 Walnut planks clad a feature wall in the master bedroom of a residence in Autin, Texas, by Cornerstone Architects.
Photography by Andrew Pogue.

“Timber beams and wood paneling have always played important roles in historical and contemporary residential design, and continue to do so,” notes Linda Jovanovich of the American Hardwood Information Center. “But in addition to these classic applications, we’ve seen a strong trend toward the use of floorboard-style wood planks on ceilings and walls. Homeowners are finding it’s a great way to create interiors that are clean and modern yet still have a traditional warmth.”

New York–based interior designer Laura Bohn agrees. “I’ve installed wood-plank ceilings in many projects, both in the city and the country,” she says. “The ceiling is often a forgotten surface, but I like to think of it as the fifth wall in a room—a blank canvas that can enhance the architecture of a space.”

A case in point is a vacation home in Aspen, Colorado, where Bohn used tongue-and-groove red oak planks on the floors and living-area ceilings. “It’s a big, sprawling house,” Bohn says. “Using the same materials underfoot and overhead gave the spaces added unity.” In some rooms, the wood ceilings extend past clerestory windows to create covered porches that link the interior of the house to the mountain landscape outside. More drama is provided by the natural light that streams through the clerestories and across the ceilings, changing the look of the red oak boards throughout the day.

Rebecca Ascher, principal at Ascher Davis Architects in New York and Newport, Rhode Island, points out that only large, high-ceilinged rooms can accommodate such visually distinctive overhead treatment without being overwhelmed. “This is especially true if you’re using strongly characterful hardwoods like walnut or hickory,” she says. “In smaller, lower spaces, a plank ceiling with too much personality can feel oppressive. In those situations, I would probably specify something simple like poplar beadboard finished with a light, natural stain. That would look crisp and airy, adding visual interest while remaining pleasingly low-key.”

Home renovators have discovered that installing new wood floorboards overhead is not only a surefire way to refresh an interior—even change its character entirely, if so desired—but also an effective method of covering old, damaged ceilings with relative ease: “Tongue-and-groove can be installed directly over drywall, plaster, and other ceiling materials,” Ascher says. “Just make sure it is securely attached to the joists underneath.”

Similar decorative and architectural transformations can be achieved by covering existing walls with wood planking. A feature wall clad in honey-colored oak or some other distinctive hardwood can give a room focus, bringing a sense of organization and intention to what was previously an amorphous or confused space. It can also add warmth, color, and texture to sleek, modernist interiors that can sometimes feel chilly or austere. That is what Texas-based Cornerstone Architects did in a contemporary Austin residence: The decorative temperature of the master bedroom—a coolly elegant arrangement of steel and glass, polished concrete, and white plaster—was raised a degree or two by turning the entire wall behind the headboard into a magnificent expanse of burnished walnut boards.

Installing hardwood planking on existing walls has become even easier in recent years with the development of self-adhesive boards. “All you need is a wall surface that has been primed or painted and is clean, dry, and relatively flat,” says Jack Shannon, III of Rustick Wood Co. in Tennessee, one of a growing number of manufactures producing sustainably grown, stick-on hardwood boards. “Our solid wood boards are available in a variety of finishes, ranging from the refined to the rustic, to fit different styles of home décor.” The five-inch-wide planks come in lengths between two and five feet and can be applied in many possible patterns: classic end-to-end horizontals and verticals, graphic herringbones and chevrons—the homeowner’s imagination is the only real limit. 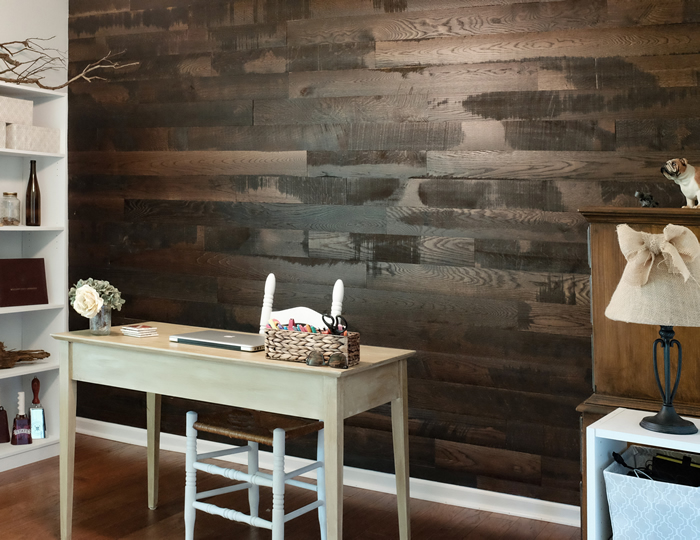 Self-adhesive oak planks from the Rustick Wall Co. bring a country vibe to a den.

American Hardwood Information Center2 days ago
Get some rest and relaxation this weekend. Because, just like #RealAmericanHardwood floors, you deserve it.

American Hardwoods @AmericanHardwds
2 days ago
Are you a design professional or simply interested in learning more about #AmericanHardwoods for your new home or reno project? Download our free app today. https://t.co/NmdcFSMWrU
View on Twitter
0
4