The Basics of Hardwood Finishing

Hardwood products are finished to enhance or alter the natural beauty of the wood, and to protect the wood from damage by moisture and handling. A quality finish must offer acceptable performance and also meet the project's aesthetic requirements.

The Architectural Woodwork Institute has established specific finishing systems and provides guidelines and recommendations for every step of the process. Costs of the systems vary greatly: the higher performing finishes usually are more costly than the lower performing finishes. Yet, unnecessary cost could be added to a project through over-specification. Crown moulding, for example, may not require the same level of finish performance as a handrail.

Please refer to the Glossary in this section for further definitions of terms.

The most important step in hardwood finishing is wood preparation. Indentations, grease, oil and other wood defects are removed with multiple grits of sandpaper, scraping, and even sponging and then sanding. The stain and finish then can be taken into the pores evenly across the whole surface.

The cellular structure of a wood influences its appearance. Open Grain hardwoods, such as elm, oak, and ash are "ring-porous" species. These species have distinct figure and grain patterns. Close Grain hardwoods, such as cherry, maple, birch, and yellow poplar, are "diffuse-porous" species. Most North American diffuse-porous woods have small, dense pores resulting in less distinct figure and grain.

Certain closed-grain woods such as cherry and maple tend to develop finishing blotches caused by textured grain. No matter how much sanding is used on these areas, they will never disappear.

A stain's penetration also depends on the final grit with which the wood was sanded. For instance, the large valleys left by 80 grit sandpaper will absorb much more pigment than will the fine tracks left by 150 grit sandpaper. For this reason it is important to prepare samples with the actual grits and the actual stains and finishes.

Colorants
After the wood has been well-prepared, it is ready for the even absorption into the wood - or absorption onto the wood's surface - of dyes, stains or fillers. In many cases, it is appropriate to sponge the surface with water, alcohol or solvents to show any areas which may contain glue, marks, oil or uneven sanding. Colorants can be broken into two large groups: dyes and pigmented stains.

Dyes
Dyes are a solution of colorants in mineral spirits, oil, alcohol or water. Modern woodworking dyes are very similar to those used for dyeing cloth, paper or leather. Dyes change the hue of the wood without hiding its figure or rendering the surface unclear or muddy. In addition, dyes penetrate both the soft and hard grain, and often enhance or "bring out the grain."

The molecular size of the dye particles is much smaller than that of mineral particles in stains, and thus dyes appear more transparent. In addition, dyes bind to the wood because of their chemical molecular structure and no additional binder is required. With water-based dyes, as the water evaporates, the wood is left with only the color in its surface.

The four main types of dyes are: water-, alcohol-, oil- and solvent-based. Each has a particular use in the coloring process. For instance, with maple or birdseye maple, it may be found that water-soluble dyes penetrate more evenly across the whole surface. On a more oily wood, oil- or solvent-based dyes may penetrate better. Oil- and solvent-based dyes may be added to pigment stains to form a combined stain and dye. This process may be able to yield the same color with only one operation.

Dyes are less light-fast than pigmented stains and in renovation work this can be used to an advantage.

Stains
Produced from a variety of synthetic and organic mineral sources, stains are dispersions of particles of pigment within an oil or solvent base. The pigments are ground into fine particles and come in a powdered form which may be added to other stains to increase color and density.

The depth of the stain and its opaqueness are directly related to the pigment's solubility, as well as the size, and density of particles in the solution. Stains may be sprayed, brushed or wiped onto the surface. The depth and final color also are determined by the length of time the stain is allowed to remain on the surface, and how hard the stain is wiped off.

In very dark colors, it is difficult to reach the saturation of color without also covering the grain. For this reason, many projects are colored with a dye and then stained to produce a clear but dark color.

Pigmented stains will fill the grain and leave the wood surface with less colorant, whereas dyes will stain the grain and the areas between the grain approximately the same color.

Wood Fillers
Woods with open grain structure such as oak and ash have very large pores. In some cases it may be desirable to fill the pores to allow the surface to appear smoother or the pores to appear lighter. Oil-based fillers may be mixed with oil-based stains to even the wood's color and fill, in one step. Fillers are applied in a heavy film or paste form either by spraying or brushing, and the excess is wiped off with rags, scrapers or burlap, flush with the top of the wood surface.

Sealers
All finishes require a sealer. The finish can be self-sealing or the sealer can be different from the top coat.

In many cases, a vinyl sealer is used to lock in the color and protect the grain. Vinyl sealers even are used under oil-based finishes. The sealer locks in the colorants, seals the grain, starts the filling process, and provides a sandable coating. In many cases, the sealer is filled with particles which make the surface easier to sand but can also inhibit clarity.

Glazes
Glazes are transparent or semi-transparent stains which are applied after the sealer coat. In some cases, a transparent alcohol dye may be applied as a glaze as well. Glazes are often used to even out a light and dark area after the staining and sealing process. It is only after the sealer has been applied and sanded that the true color of the wood can be seen. This is also typically the time when touch-up of glue marks and unevenness of color can be corrected.

Toners
Toners are tinted applications of sealer or top coat which are used to build up a color. Toners tend to cover the grain because they are essentially pigments suspended in the finish.

Applying a Water-Based Primer or Stain
The Paint Quality Institute indicates that water-based primers, stains, and/or clear coats can raise the grain of wood since water swells wood fibers. To produce a smooth finish, wet bare hardwood surfaces with a rag - before applying a water-based finish product.

In about 30 minutes, sand off swelled wood fibers (whiskers) with fine garnet sandpaper (200 or 220 grit). Always sand in the direction of the grain of the wood (never diagonally or across it at right angles). Dust the surface, and apply your water-based primer, stain or clear coat.

How to Achieve a Rich, Dark Hardwood Finish
Producing deep, rich hardwood finishes is possible by performing a two-step staining process. Synthetic dye concentrates can be suspended in water or alcohol, and then sprayed onto the wood prior to using a pigmented wiping stain. This two-step process may be used on all species of hardwoods, and will provide depth and uniformity of color that is unachievable in a one-step pigmented stain process.

Subsequent to all of these coloring and staining steps, a toner may be sprayed over any of the previously discussed stain systems to develop the desired hardwood color. A toner may be mixed with one part pigmented wiping stain and four parts acetone. Toners will even out variations in the color of the wood, such as between plywoods and hardwoods, as well as add more depth and strength to the overall color.

Specialty Finish
To achieve a European stain appearance on maple and cherry, a sealer may be applied and sanded prior to applying a shader coat. A shader coat consists of a reduced lacquer sealer with a synthetic dye added to the desired color. The shader coat should be sprayed uniformly to obtain depth of color. A topcoat can then be applied directly over the shader. This process provides a very uniform look with no blotchiness or color variations from wood characteristics, and is sometimes applied in a very light color to provide a uniform, natural maple look.

American Hardwood Information Center12 hours ago
If your home is in need of more storage, custom built-in bookshelves are a perfect solution. 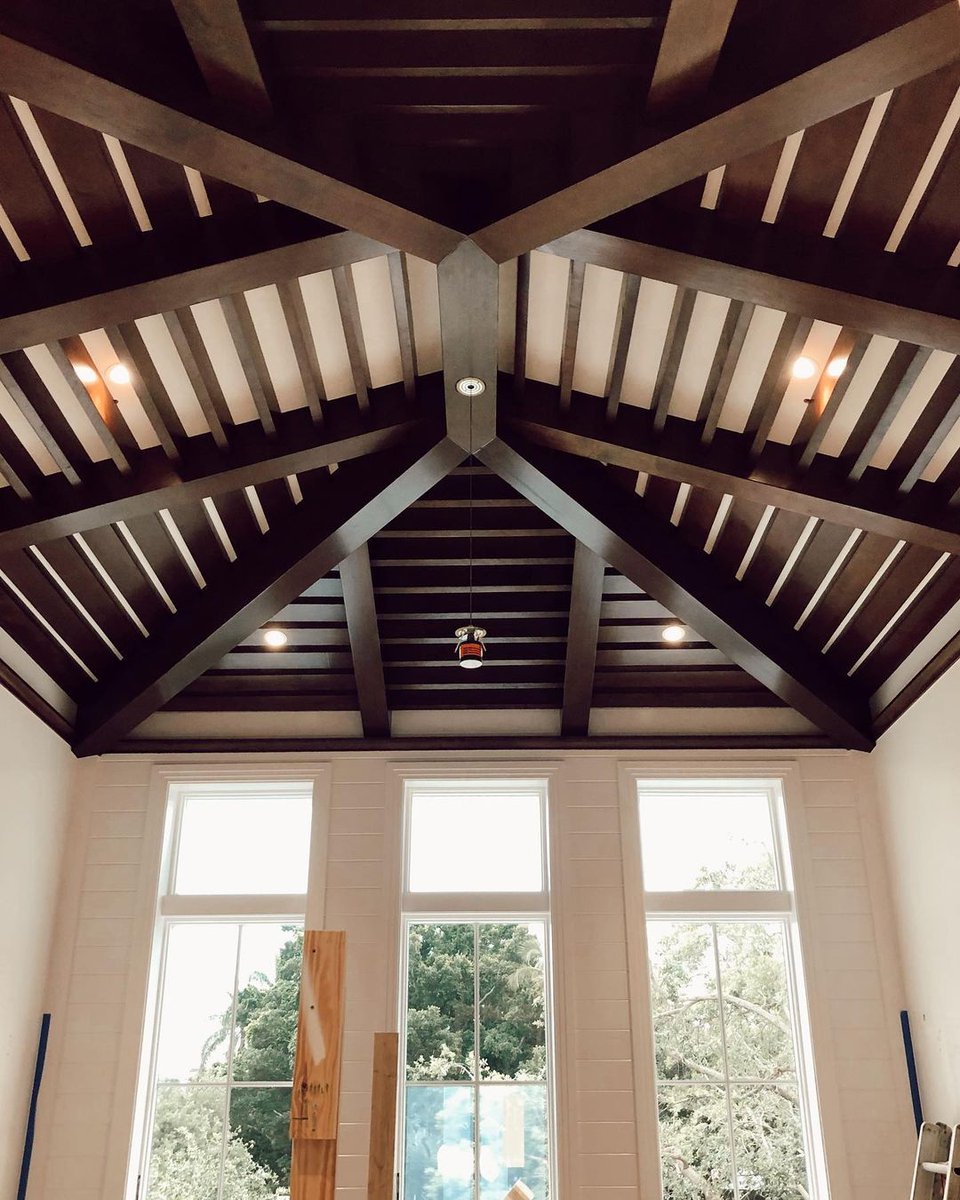