The Beauty of Barn Doors

by Amanda Duchek | Jan 23, 2018 | Consumer, Throughout the Home, Treasured for Generations 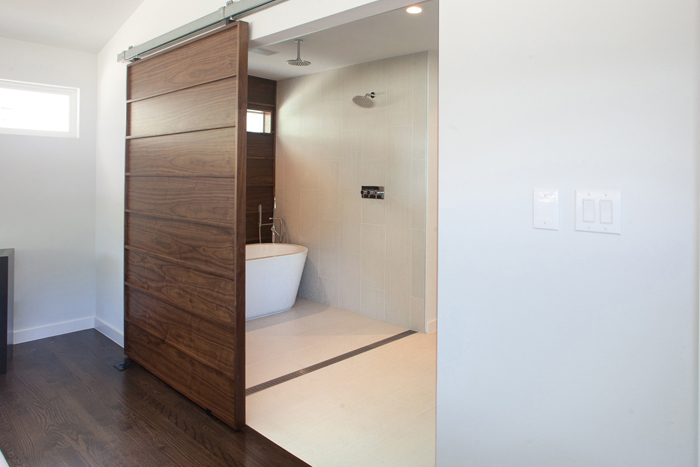 Barn doors moved out of the farmyard and into the house a long time ago. Recently, however, they have become an even more popular and useful feature in residential design. It’s not hard to see why.
“Many homeowners hear the term ‘barn door’ and think of reclaimed, rustic wood, which may not be a look they’re interested in,” says Linda Jovanovich of the American Hardwood Information Center, www.hardwoodinfo.com. “But contemporary barn doors offer many more aesthetic choices than their traditional image suggests. We’ve noticed a trend toward the use of solid, fine-milled hardwoods like walnut and cherry for sliding doors, which not only gives them satisfying heft but is also a great way to bring the warmth and character of natural wood into an interior.” 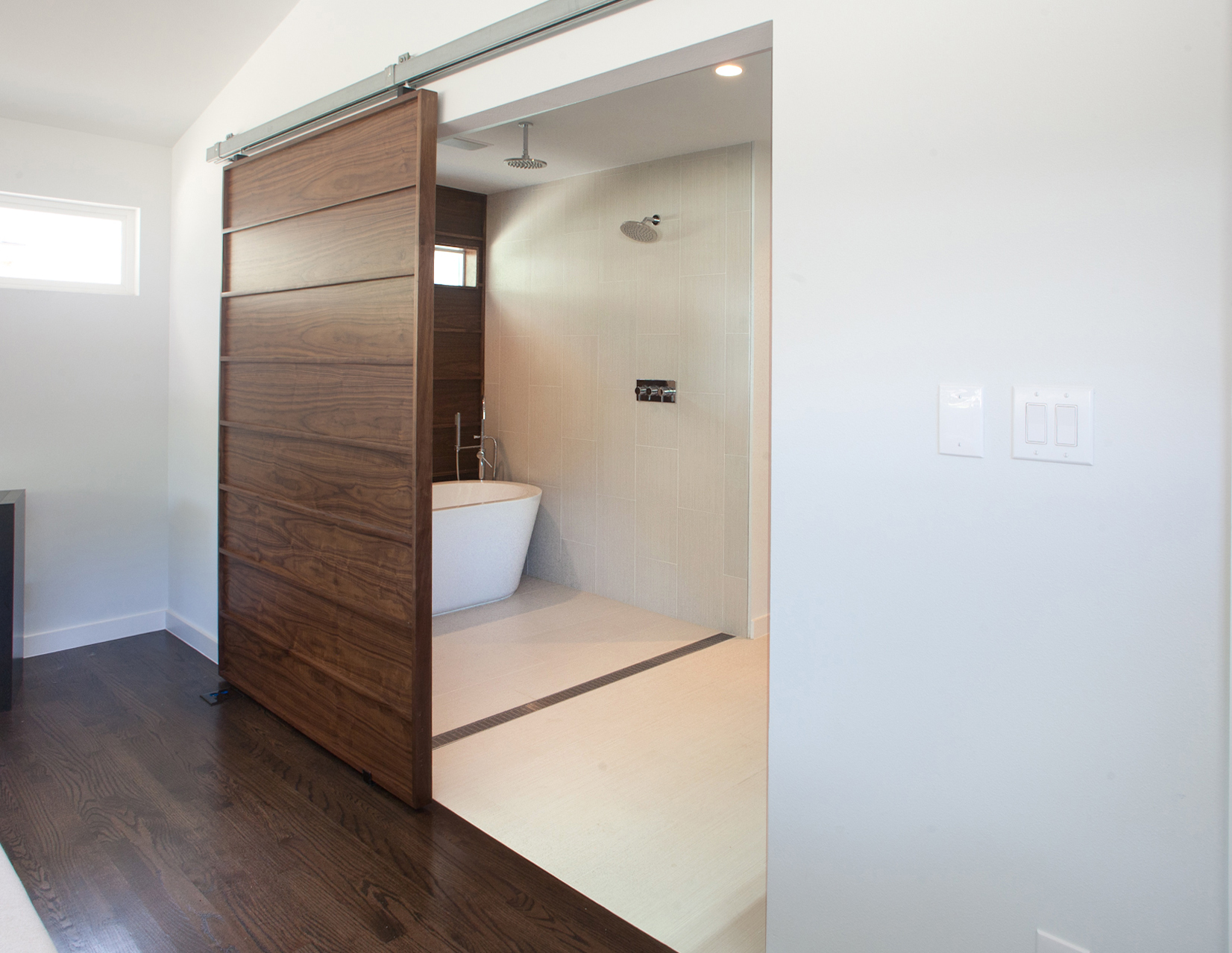 The master bath in a Dallas house by Modern Craft Construction features a barn door and accent wall both made of walnut. Photograph by RUDA Photography 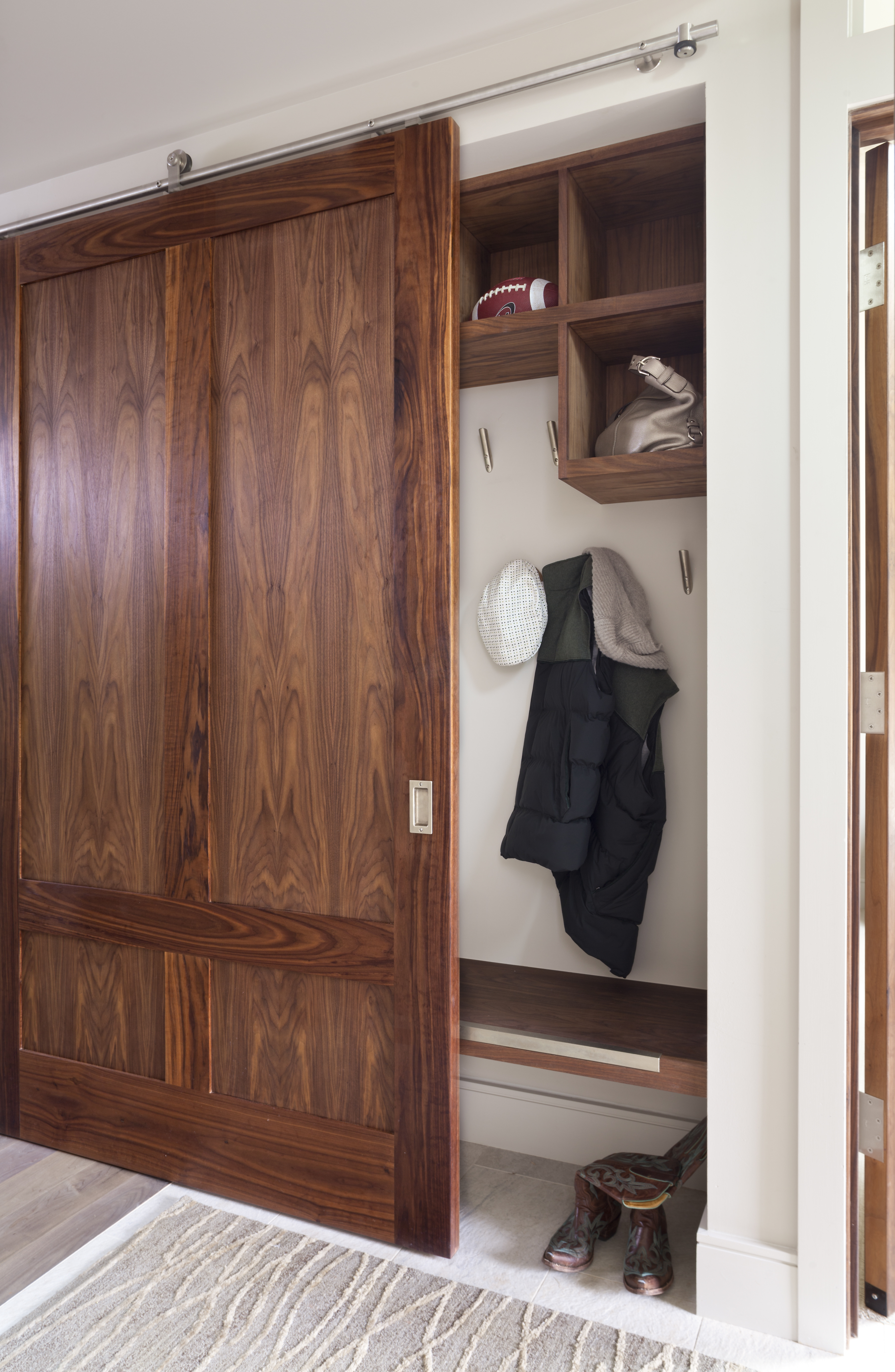 New York–based interior designer Laura Bohn agrees. “I’ve installed hardwood barn doors in many projects, both in the city and the country,” she says. “They provide a lot of decorative interest, particularly hung in pairs. I’d choose a clean, sophisticated design in a subtle wood like maple or birch for an urban interior. Poplar planks painted a cheerful color, or characterful woods like hickory and cypress, would be better for doors in a country house.”

Along with their decorative qualities, barn doors often provide a functional alternative to conventional swing doors. “Barn doors, either singly or in pairs, offer a simple and effective way to divide large spaces—a kitchen from a living-dining area, for example,” says Laguna Beach, California–based designer Lisa McDennon. “They can create instant separation and privacy in even the most open-plan house, which allows for greater flexibility in daily use.”

“A traditional door can use up to nine square feet of space, which is a lot in city apartments where every inch counts,” notes New York–based designer Glenn Gissler. “A barn door only takes up a sliver of floor, making it a terrific solution in tight situations such as hallways and narrow rooms. You just need enough adjacent wall footage to slide the door over.”

Barn doors offer economic advantages, too. While pocket doors have similar space-saving benefits, installing them requires wall reconstruction—a messy and expensive business. Because barn doors run on hardware installed outside the frame, they need no such preparatory construction, saving time and money. And the tracks themselves are part of the doors decorative appeal. “There’s a terrific selection of barn-door hardware available,” Bohn says. “Use sleek, high-tech tracks in brushed aluminum or satin-finish stainless steel for a modern urban vibe. For a more rustic or industrial statement, think blackened iron or raw steel, both of which look powerfully graphic against natural or painted wood.”

American Hardwood Information Center23 hours ago
Some great ideas for how to use hardwood in a contemporary setting! | #whiteoak #homegoals #contemporaryhome #realwoodreallife https://bit.ly/2lUUi79 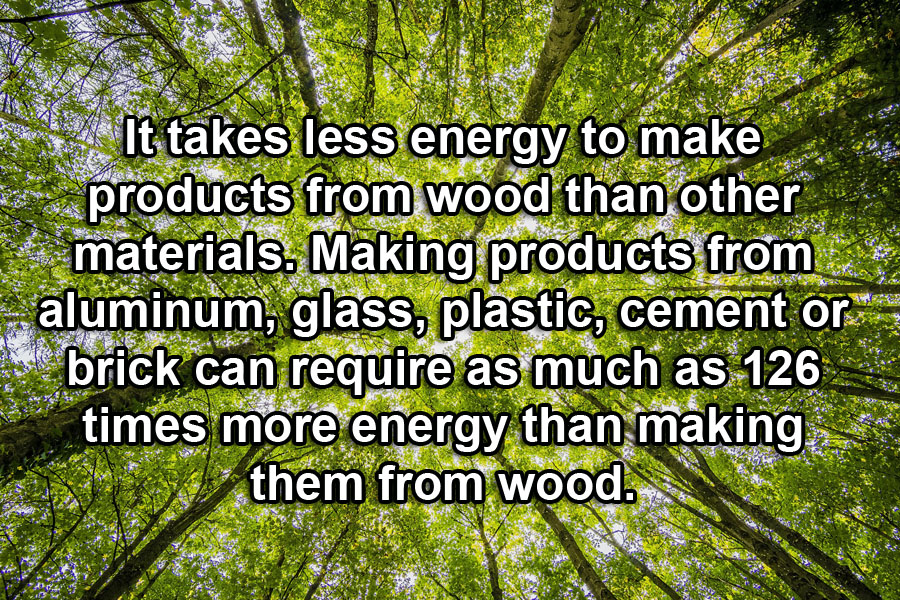