I was at my family’s lakeside cottage in Upstate New York this summer, having breakfast on the porch, enjoying the view of the water and trees, when I was shaken out of my reverie by an alarming news report on NPR’s Morning Edition. 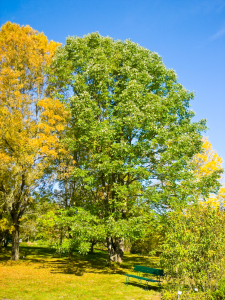 American white ash trees, which are threatened by emerald ash borers, an invasive beetle from Asia.

“There's a voracious little bug destroying forests across the eastern U.S.,” said the radio reporter. “Scientists say emerald ash borers, exotic beetles imported accidentally from Asia, have killed as many as 50 million trees. They're now threatening groves in New York's Adirondack Mountains that are used to make an iconic kind of baseball bat.”

That really got my attention. The Adirondacks aren’t so far from our summer cottage, and neither is Cooperstown, the home of the National Baseball Hall of Fame and Museum. The reporter went on to visit the Rawlings plant in Dolgeville, a small sawmill west of Albany, where they’ve handcrafted baseball bats made from locally sourced white ash wood for more than a century.

The bats are a longtime favorite with major leaguers because white ash doesn’t shatter as easily as some other hardwoods. But now the white ash forests in New York and Pennsylvania are being threatened by the emerald-green bugs, which look a bit like an iridescent cicadas and whose larvae turn healthy tree-bark into pulp. 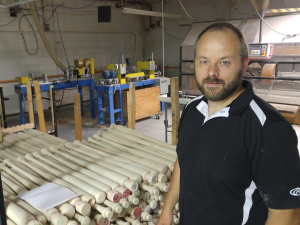 Rawlings baseball bat plant manager Ron Vander Groef says that the white ash they use could be wiped out in the next few years. Photograph: Brian Mann/North Country Public Radio

“If the ash borer is not controlled, it will wipe out the entire species of white ash,” Ron Vander Groef, Rawlings’ plant manager, told the NPR reporter. “We will not be able to make any more pro bats or retail bats or anything out of white ash because it will be gone.” Vander Groef figures the company's supply could be gone within three years, which is shocking. It reminds me of the fate of the American chestnut tree, which was decimated to the point of extinction by blight in the first half of the 20th century.

“It's bordering on catastrophic,” Deborah McCullough, one of the first entomologists to realize that emerald ash borers had invaded, told NPR. Federal and state officials are trying to quarantine areas affected by the insects, but in some areas 90 percent of the trees have died. “When you start losing entire species, the effects cascade through the whole ecosystem,” said McCullough, who is nevertheless hopeful that some white ash will survive. For the sake of our national pastime—and America’s great eastern forests—I hope so too.

A Beetle May Soon Strike Out Baseball's Famous Ash Bats