Wood You Believe It?

I recently visited New York’s Museum of Arts and Design to see “Against The Grain: Wood in Contemporary Art, Craft and Design,” an exhibition of sculptures, installations, and furnishings that push the limits of the material in mind-blowing directions. The 90 pieces on display show artists and designers experimenting with wood’s versatility—whether that means using new technologies or mastering centuries-old methods. Here are three of my favorite pieces from the exhibition. 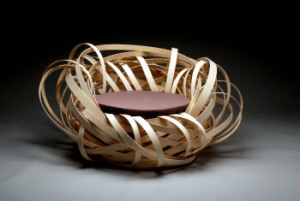 I was excited by the very unusual way Danish designer Nina Bruun used birch in Nest, a chair inspired by a bird’s nest. To create a “nest feeling,” she played with birch strips in different thicknesses, winding them around a four-legged supporting structure. “My idea was to create a graphical chaos which still felt like a unified whole,” says the designer. Sitting in the center of the nest like a brown egg, the seat cushion contrasts beautifully with the halo of pale blonde birch strips surrounding it. Even though the birch was very pliable, constructing the chair was no easy task. “It was very difficult to get the nest right,” Bruun admits. “I had to do it over and over again before it was perfect.”

New York-based artist Christopher Kurtz used ash and white oak to extraordinary effect in (A)typical Windsor Form, a sculptural tour de force showing two Windsor-style chairs arching backward to meld into one another. While the piece was all hand made, it utilized some small-scale production techniques. Some of the chair parts were made with very sophisticated tools like a computer numeric router, while other parts, like the chair seats, were carved with hand planes and spoke shaves. “I believe in using whatever tools are necessary to achieve the best result,” Kurtz says, “and old world hand tools are a big part of that for me.” Safe to say the craftsmen who made Windsor chairs back in the day would be dumbfounded to see hardwoods like ash and oak shaped with such nonchalant virtuosity. 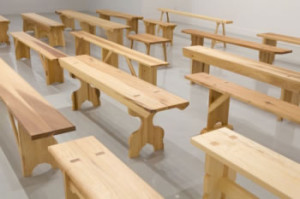 Perhaps the most beautiful installation I saw was the British sculptor Francis Cape’s Utopian Benches. This comprised a group of superbly reconstructed benches originally designed for 19th-century American utopian communities with a craft tradition, the most famous being the Shakers but also including the Amana Inspirationists, the Zoar Sepratists, and the Harmony Society. Cape, a trained woodworker, constructed all the benches, which were intended for many uses—communal kitchens, school rooms, meeting halls—from poplar sourced near his studio in upstate New York. He chose poplar, which he finished simply with linseed oil, because it’s not a decorative wood and is a fast-growing, renewable resource. The combination of the benches’ unadorned forms and the wood’s warm unassuming glow was quite magical.

There were many other pieces that extended the aesthetic and physical possibilities of hardwood with exhilarating imagination and skill. If you can’t get to the museum in New York to see “Against The Grain: Wood in Contemporary Art, Craft and Design,” which runs through September 15, I recommend the gorgeous book of the same name, published in conjunction with the show and available on the museum website (madmuseum.org). You’ll never look at wood the same way again.