Wharton Esherick (1897–1970) was a true American original. An academically trained but unsuccessful painter, in 1924 he abandoned brushes and oils for chisels and wood. For the next half century, Esherick combined his passion for modern art with his skill at working hardwood to produce sensually organic sculptures, furniture, interiors, and buildings. By the time of his death, Esherick was recognized as a pioneer whose vision of high-art craftsmanship and extraordinary body of work were crucial in establishing what we now know as the American Studio Craft Movement. 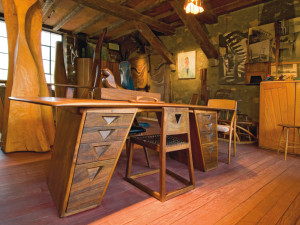 Made from American walnut with exotic-wood decorative elements, Esherick’s 1939 flat top desk, with its matching chair, was inspired by the humble sawhorse. Photo by James Mario.

Esherick’s most astonishing creation was his small mountainside home in Paoli, just west of Valley Forge, Pennsylvania. Begun in 1926 as a sculpting studio, it evolved and expanded over that artist’s lifetime into a multipurpose, multilevel stone and wood structure. The interior is a paean to the possibilities of hardwood—a unified environment of architectural forms, structural elements, and furnishings executed in the spirit of sculpture. Now a National Historic Landmark for Architecture, it has been preserved as it was when Esherick lived and worked there. With more than 200 of the artist’s works on display, it makes for one of the country’s most richly rewarding house museums.

Esherick, who understood that the emotional power of American hardwoods was as important as their serviceable qualities, bought the Paoli property because of an immediate connection he felt for a giant cherry tree growing on it. When the splendid tree eventually died in the late 1930s, Esherick slabbed it into lumber, which he later used to create his kitchen walls. For the rest of his life he would be surrounded by an old friend. 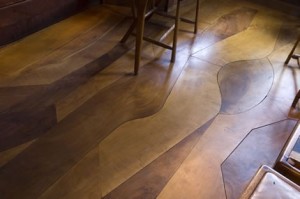 Esherick saw the floors in the house as an equally attractive opportunity to showcase the expressive and practical possibilities of locally sourced wood. One striking example is also in the kitchen, where he took scrap walnut and apple wood from a local woodcutter, laid the pieces down jigsaw style, and produced the most wonderfully sinuous underfoot pattern.

The house’s furniture, too, is a testament to Esherick’s unfailing creative imagination. A case in point: His 1939 flat top desk—expanses of burnished American walnut combined with decorative elements in exotic wood—takes its inspiration from the humble sawhorse, turning that everyday object into a powerfully dynamic yet highly functional form. 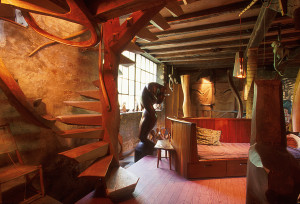 The living room of the Wharton Esherick house, with the famous hand-carved red-oak spiral staircase from 1930, and many examples of Esherick’s furniture and sculpture, including Oblivion, which depicts two entwined lovers carved from the trunk of a walnut tree. Photo by G. Widman for GPTMC.

In 1930 Esherick installed what is undoubtedly the house’s most famous feature, a spiral staircase constructed from massive slabs of hand-hewn red oak. Both a functional architectural element and a stunning piece of sculpture, the singular stair was temporarily removed twice, first to be shown at the 1939 New York World’s Fair and then in 1958 for a one-man retrospective at New York’s Museum of Contemporary Crafts. Its iconic status has been unchallenged ever since.

Tours of the Wharton Esherick Museum (whartonesherickmuseum.org) in Paoli, PA, are by reservation only. Please call 610-644-5822 to book your guided tour.