Mel Smilow (1922–2002) was a Bronx-born furniture designer, manufacturer, and retailer. Smilow’s elegant midcentury-modern sofas and chairs, tables and case goods—handmade from solid American walnut, birch, and oak, rather than the more common teak of the time—were widely regarded as among the very best contemporary home furnishings produced in this country at the time. After his company closed in 1972, however, Smilow’s name and furniture largely fell out of the design world’s consciousness.

That started to change a few years ago when well-informed connoisseurs began seeking out vintage Smilow pieces, with the result that they have become highly collectible from specialist auction houses, antiques dealers, and websites such as 1stdibs.com. And now the late designer’s daughter, Judy Smilow, a glass and products designer, in collaboration with her sister, Pam Smilow, an artist and color consultant, has put several of her father’s iconic pieces back into production.

The sisters grew up in Usonia Homes, a Frank Lloyd Wright cooperative community in Pleasantville, New York, surrounded by their father’s artwork and furniture, absorbing his natural, simple, modern aesthetic. In 2002, Judy rediscovered the original furniture drawings and decided to bring the classic modern designs back to life. “Our first priority was to find a small family-owned American furniture manufacturer whose quality of work my father would have approved,” Judy says. A 50-year-old factory in Lancaster County, Pennsylvania, proved a perfect fit, and the initial ten-piece Smilow Design collection was launched at the International Contemporary Furniture Fair in May 2013. 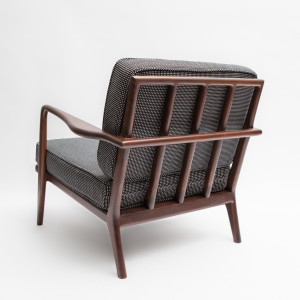 My favorites items include the Rail Back Armchair, first designed by Mel Smilow in 1950. Like the original, the reissue is handmade from solid American black walnut with a natural finish that allows the full beauty of the grain to shine through. Comprising a light frame supporting a pair of upholstered cushions, the chair is equally beautiful no matter what angle it’s viewed from—meaning it can be placed anywhere in a room and still look great. There’s a matching ottoman, and the piece is also available as a sleek, low-slung sofa.

The Credenza in solid American black walnut from Smilow Design

Equally sleek and low-slung, and also made of black walnut, the Credenza is another of my favorite Smilow Design reissues. Dating from 1950, the three-door cabinet has interior shelves and a leather-lined drawer. Standing on four slender legs, and exquisitely finished front and back, the Credenza can be used as a centrally placed space divider. It’s also available without legs as a wall-mounted version, which creates a quintessentially mid-century-modern floating effect. 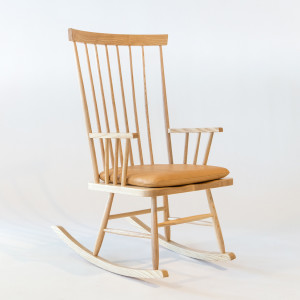 The Rocking Chair in solid American ash from Smilow Design

The collection includes the terrific solid ash Rocking Chair—a classic furniture form that Smilow gave a modernist makeover back in 1960.  The chair captured the design spirit of the age so perfectly it was prominently featured in the American Pavilion at Expo 67 in Montreal, Canada, generally rated the most successful World’s Fair of the 20th century. Cool and calm in a natural finish, the rocker is also available in black or red lacquer, which gives it an even more Swinging Sixties vibe.