An American in Azerbaijan

A story on the website of our sister organization, the American Hardwood Export Council, alerted me to an extraordinary project involving the even more extraordinary use of American white oak. Designed by Pritzker Prize-winning architect Zaha Hadid, the Heydar Aliyev Center is a cultural complex in Baku, the capital of Azerbaijan on the Western coast of the Caspian Sea. 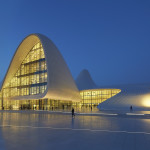 Opened in 2012, the 619,000-square-foot building comprises a series of gracefully undulating ribbons that rise and fall to create a flowing shell wrapped over soaring glass-and-steel facades. Clad in thousands of gleaming white tiles, the fluid structure houses a museum, exhibition halls, and a 1,000-seat auditorium. It’s in that last space, an exquisite 1,000-seat theater, that American white oak makes an unexpected and stunningly beautiful appearance.

The theater’s interior, which is as free flowing and smoothly organic as the center’s exterior, is lined entirely in American white oak.  Continuous ribbons of the gorgeous, honey-color hardwood encircle the auditorium and stage, forming the ceiling, walls, and floor. The effect is wonderfully poetic, not only evoking the growth rings of an enormous tree but also suggesting waves of sound and light emanating from the stage. It’s easy to imagine feeling your spirits soar on entering the warm embrace of this welcoming space. 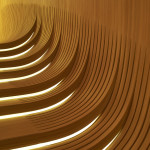 The architect made sure that the theater sounds as good as it looks. The hardwood interior, which is constructed as an independent shell attached to the building’s steel frame, acts like the body of a giant violin, enriching the tone and harmonics of the music produced in it. And the wood ribbons provide just the sort of irregular reflective surface that provides a fully integrated aural environment while avoiding the problem of flutter echoes. Thanks to Hadid, American white oak never looked or sounded better.