Reclaimed hardwood is a beautiful, sustainable material that can be used in many modern residential applications to create a sense of warmth, age, and texture. I particularly love its use in the kitchen and bath, two rooms where the need for clean, highly functional surfaces sometimes results in a slightly clinical or antiseptic feeling. Here are three examples I’ve recently come across where reclaimed hardwood lends an attractive soft patina—and a big dollop of charm—to what could have been less-ingratiating spaces. 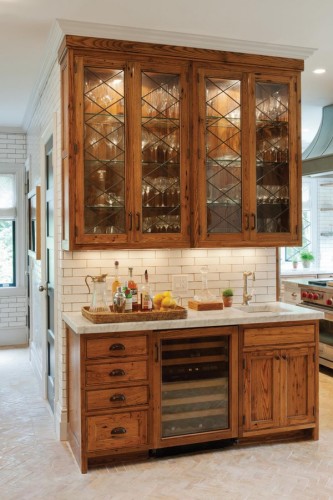 American chestnut was once hugely popular for home construction, until about 100 years ago when blight almost completely eradicated the species in this country. Today reclamation is the only way to source this gorgeous hardwood. Such is the case with a recently remodeled 1920s Dutch colonial house in Connecticut, where Crown Point Cabinetry used chestnut boards recovered from a derelict Virginia barn to create wonderfully characterful kitchen cabinetry. After removing nails and other metal objects from the boards, the cabinetmakers replaned them to reveal fresh grains. The finished cabinets were given a honey stain with a Van Dyke glaze. I particularly like the wet bar, which has diamond-paned cabinet doors inspired by the house’s original leaded-glass windows. The marble-top bar may look like a treasured antique, but it accommodates a sink, wine refrigerator, and other 21st century necessities. 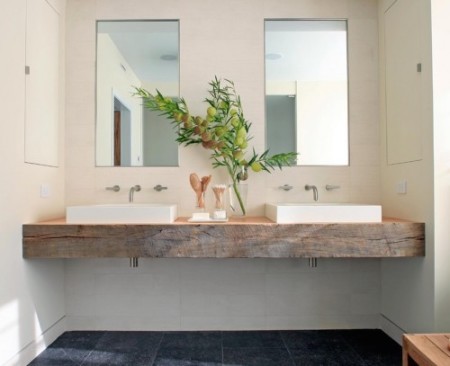 Commissioned to renovate a house on Chicago’s North Shore for a family with five children all under 10, Burns + Beyerl Architects turned the master bath into a spa-like retreat for the busy parents. Recycled materials such as French terra cotta floor tiles and planks salvaged from mushroom pallets feature throughout the project. The bath includes a spectacular vanity counter made from a reclaimed five-inch-thick white oak beam. The rugged beam makes a pleasing contrast with the clean lines and textures of the bathroom fixtures, the plain cream plaster walls, the limestone tile backsplash, and the gray granite tile floor. The architects had the top surface of the beam sanded smooth and sealed with marine varnish to protect it from water damage. “We also suggested adding a glass top but the owners preferred the wood and were willing to add a clear finish every year if need be,” the architects report. “They’ve had it five years now and so far have only had to do a light sanding and apply new sealer once.” 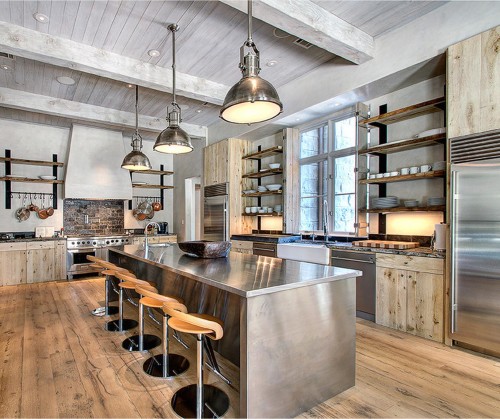 Reclaimed white oak in several different finishes is used for the floors, cabinets, open shelves, ceiling, and beams in the kitchen of a new Houston residence built by Parker House Inc.

Parker House Inc., a luxury homebuilder in Texas, makes extensive use of reclaimed white oak in the large kitchen of a recently completed residence in Houston. The floor, cabinetry, open shelving, ceiling, and beams are all made of reclaimed oak. The seven-inch-wide oak floorboards and the open wall shelves have the same warm honey-color finish, while the wood on the cabinets has a lighter, blonder look. The oak ceiling and the massive cross beams are a distinctive silver-gray, an effect achieved by bleaching the timber and applying a custom wash stain. It’s nearly the same shade as the custom gray of the Venetian plaster walls. The appliances, the pendant light fixtures, and the enormous kitchen island—all made of gleaming stainless steel—play another variation on the silver-gray theme, bring a bracing note of industrial chic to the impressive space.

American Hardwood Information Center23 hours ago
It doesn't get any more custom than #RealAmericanHardwood flooring.

Design, cabinetry, and photo by #uniquekitchensandbaths 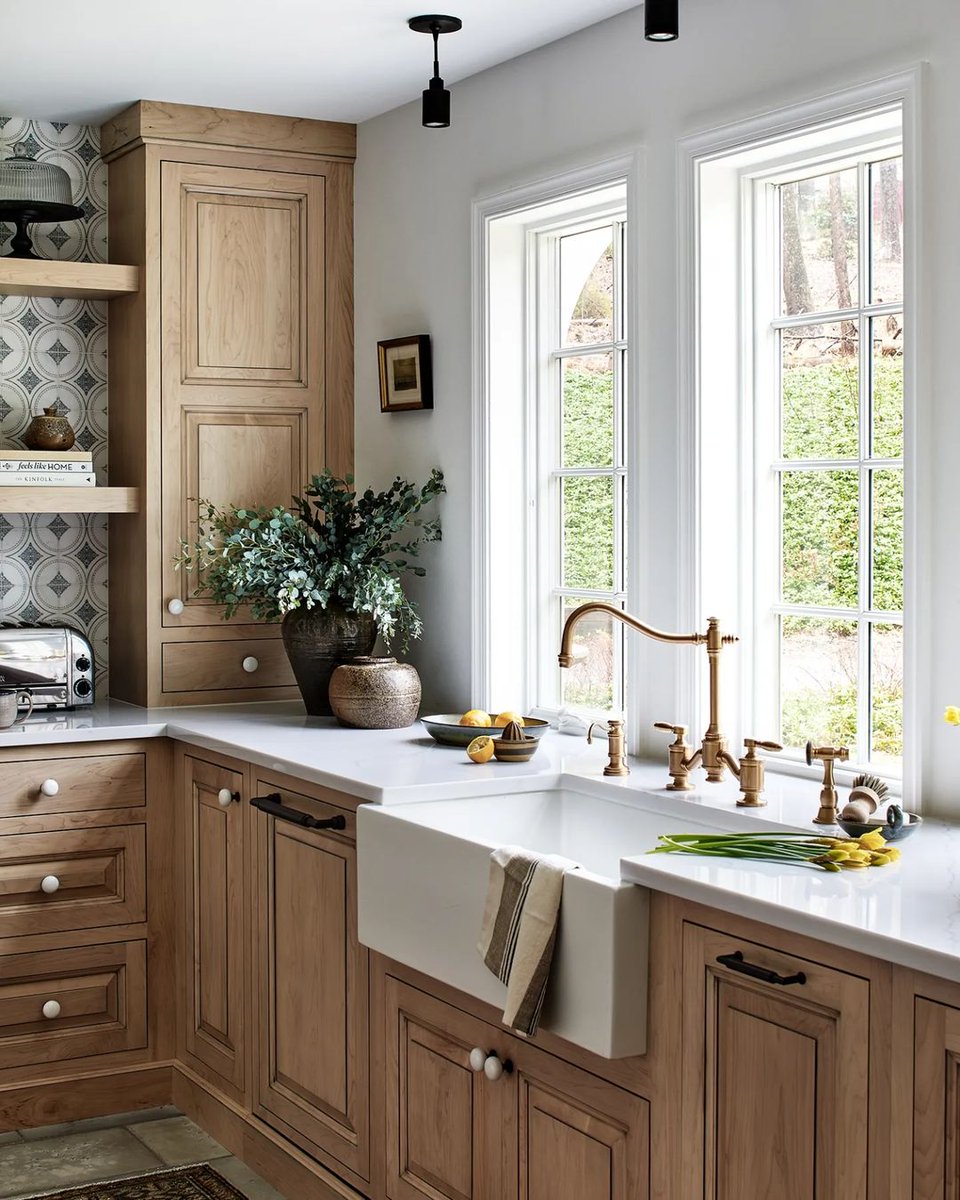