There are always interesting discoveries to be made at KBIS, the annual Kitchen & Bath Industry Show, but one installation really got my attention at this January’s expo, which was held in Orlando, Florida. It was a large and very elaborate bathroom by Wellborn Cabinet, Inc., the Alabama-based high-end cabinetry manufacturer. What struck me even more than the room’s lavish dimensions and the over-the-top style, however, was the fact that it was entirely paneled in hardwood—natural hickory with a gorgeous, warm stain, to be precise—which is highly unusual for a residential bath. I thought I’d share some images of the bigger-than-life room with you. 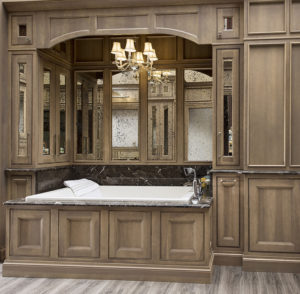 Wellborn’s model bathroom features a tub set in an alcove paneled in hickory with antiqued-mirror insets.

The bathroom is designed around three spacious alcoves: one for the tub; one for a pair of sinks; and one, with a window, for a makeup vanity. The large soaking tub, which has a rich, chocolatey marble surround and backsplash, nestles in a deep paneled niche with antiqued-mirror insets. A small chandelier hangs directly overhead, but LEDs concealed behind the valence bathe the whole grotto-like enclosure in warm, welcoming light, turning it into a hickory-lined cocoon of pampered luxury. In color and style, the paneling recalls the boiserie found in 18th-century French chateaux. In fact, Marie Antoinette herself would look right at home taking a bath in this 21st-century stunner. 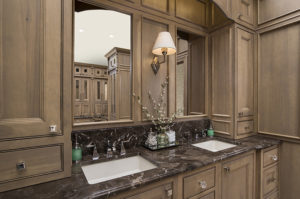 Twin sinks, set in a marble counter and surrounded by hickory cabinetry, are both sybaritic and practical.

On the adjacent wall, another alcove houses a pair of sinks set in a long counter topped with the same lustrous brown marble that surrounds the tub. Hickory cabinets below and on either side of the sinks offer ample storage, while LEDs concealed behind the arched valence like the one above the tub, together with a centrally placed sconce, provide the right amount of light for anyone using the mirrors recessed into the paneling above the backsplash. Although the effect of the splendid woodwork, sumptuous marble, and gleaming fittings is no less glamorous than that of the bathing alcove, the whole ensemble is well designed, sturdy, and practical, promising many years of useful service. 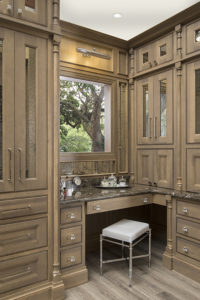 A stand-alone makeup vanity, complete with its own window, is tucked into a corner alcove.

Perhaps the bathroom’s most indulgent feature—and one women especially will take delight in—is a stand-alone makeup vanity. The built-in marble-topped station occupies its own corner alcove complete with a window, which not only bathes the user’s face in natural light but also provides a view outside. Surrounding the vanity are myriad drawers and cabinets—all fronted with the same distinctive, smoky-toned hickory used throughout the bathroom—offering enough storage space for a beauty salon’s worth of cosmetic products and grooming accoutrements. Sitting at this highly glamorous yet eminently practical counter, what woman wouldn’t feel, momentarily at least, like a lady of leisure?

American Hardwoods · 22 hours ago
@AmericanHardwds
#RealAmericanHardwood floors are anything but boring. 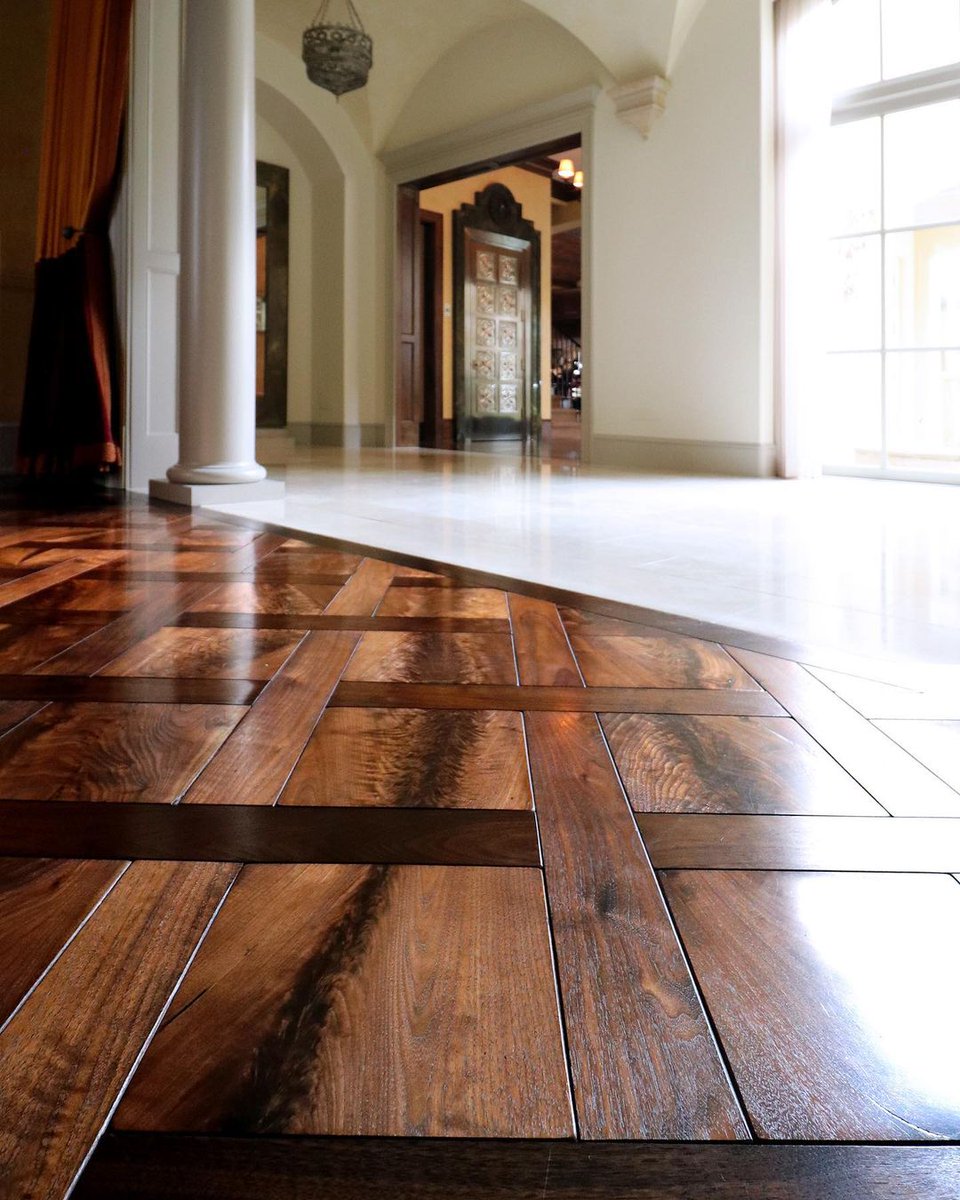