A Lake House in Michigan 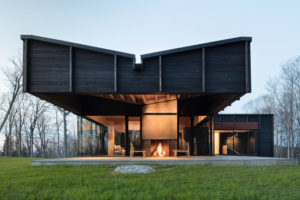 A vacation house with a butterfly roof by Desai Chia Architecture on Lake Michigan. Photograph by Paul Warchol

American hardwoods often play an outsize role in projects by Desai Chia Architecture, a New York firm led by the husband-and-wife team of Arjun Desai and Katherine Chia. A lakeside vacation retreat in Leelanau County, Michigan, designed in collaboration with Environment Architects (AOR) in 2016, is a good example of their masterly use of hardwood—in this case, cypress and ash. The 4,800-square-foot house has a butterfly roof, which gives it a dramatic appearance. Making it even more so is its almost black cladding: The 1-by-6-inch cypress boards have undergone shou sugi ban, the traditional Japanese method of charring wood so it becomes rot and insect resistant. The charred and sealed cypress was supplied by Delta Millworks, a specialist business in Austin, Texas. The charcoal color and charred texture of the wood lend a timeless, almost prehistoric aura to what is a thoroughly modernist structure. (For more information on cypress, a particularly durable hardwood, visit the Southern Cypress Manufacturers Association website, www.cypressinfo.org) 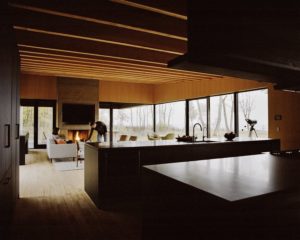 The kitchen and living room, with the terrace beyond. Photograph by Ike Edeani

Desai Chia’s use of wood inside the house is no less remarkable. The 60-acre site was thickly wooded, but most of the ash trees were dying, infected with the invasive emerald ash borer beetle. More than 100 of the plague-ridden trees had to be cleared for construction, but the architects were able to reclaim 40 of them for use in the home’s interior. Everything from the flooring, ceiling beams and panels, cabinetry, trim work, and custom pieces of furniture are made from what had seemed unusable timber. The light, golden tone of the ash wood creates spaces that feel bright, airy, and welcoming, a strong contrast with the dark exterior, which is slightly forbidding. As the architects note, “The interiors of the house embody the indigenous landscape that once thrived with old growth ash.” 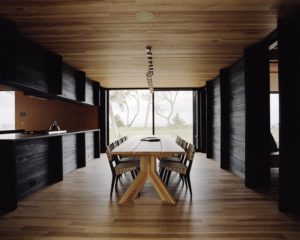 The breezeway also functions as a dining room. Photograph by Ike Edeani

The house comprises three loosely grouped volumes—containing the living and kitchen area, the master suite, and the guest rooms, respectively—linked by a breezeway that also serves as a dining room. The living area opens onto a broad terrace paved with locally sourced bluestone and equipped with an outdoor fireplace sheathed in Cor-Ten steel, whose richly oxidized surface has a similar aesthetic effect to that of the charred cypress cladding. The massive butterfly roof cantilevers more than 20 feet over the terrace, creating sufficient shelter to allow the homeowners to entertain al fresco during most of the year, enjoying sweeping views of the lake and surrounding woods in all their changing splendor. “There is a seamless movement between indoor and outdoor for the family, which they love,” Chia reports. 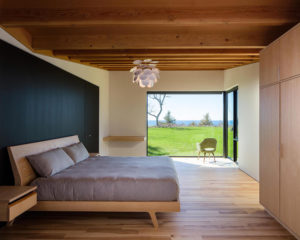 The master bedroom furniture is custom made from reclaimed ash. Photograph by Paul Warchol

Initially, the homeowners wanted to use the reclaimed ash only for flooring, but the architects convinced them to use it more extensively. In the master bedroom, for instance, it is used for the handsome custom-made bed and night stands, as well as for built-in wardrobes and shelving. The house includes a number of sustainable design elements, including geothermal heating and cooling, and rainwater collection for irrigation. Since the clients didn’t want air-conditioning in the house, the architects documented the prevailing wind patterns so that the position of windows and the orientation of the breezeway could be planned strategically, allowing for maximum natural ventilation. Lake Michigan’s shoreline already boasts some of the best vacation-house architecture in the country; Chia Desai’s design is a worth addition to that distinguished roster.

American Hardwood Information Center10 hours ago
#RealAmericanHardwood cabinetry can add a timeless, yet modern touch to any space.

Design by Lauren Buxbaum Gordon and #NateBerkusAssociates
Photo by Spacecrafting